I recently found myself writing this monstrosity of a line of code in Godot Engine:

And immediately thought there must be a better way. It turns out, there is: the _get, _set, and _get_property_list methods. They allow you to define properties of your GDScript object at runtime, not just at compile time, which is a very powerful technique when used appropriately.

Getters and setters, but for everything

_get() is a virtual method that acts sort of like the get half of setget, but for any property that isn’t already defined by your class. You can do whatever you want in that function, and you return the value of the requested property (or null if the property doesn’t exist).

Likewise, _set() is called whenever a custom property is set. It should return true if the property exists and false if it doesn’t.

This code (minus the lines that crash) outputs:

Why is this useful?

Let’s say you’re making a database system for your game. You need to sync data between the client and server, and control which data gets synced according to a fog-of-war effect. Every time a property changes, you need to know about it so you can notify the right clients–but you don’t want to copy and paste the same setget pair for every property of every object in the game!

That’s the situation I was in, and custom properties were an excellent solution. That said, they can make your code less readable if they’re not the right solution, so make sure to look at your use case and decide if it’s the right tool for the job.

You can support my work on GitHub Sponsors!

Your support helps me devote more time to writing Free Software and making the tech world just a little bit better for everyone. 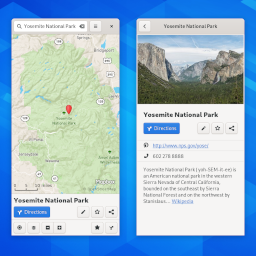 Last year, I redesigned the info bubbles in GNOME Maps. Now I’ve made that bit of the UI adaptive, so that it fits on the screen of your favorite Linux phone!

GTK provides a lot of useful widgets, but it inevitably can’t cover every possible use case. What if, for example, you need an image widget that resizes itself based on the available width, and clips its corners to fit in a popover? Fortunately, GTK makes it easy to create your own widgets that do whatever you want.